In 2011, veteran criminal trial attorney John Koufos found himself in prison after a drunk driving arrest and saw firsthand the many challenges former inmates face as they re-enter society. Since his own release and re-integration, John has committed his career to helping the formerly incarcerated find the steady employment that is so critical to their well-being. He has worked for nearly a decade in re-entry and policy advocacy, previously serving as the executive director of the New Jersey Reentry Corporation and currently working as a fair chance hiring advocate and consultant.

John is a nationally recognized criminal justice advocate with deep experience building and leading criminal justice organizations and campaigns. He has worked with multiple Presidential Administrations, dozens of Governors and Cabinets members, and countless businesses and nonprofits. He has been interviewed by a wide array of outlets including the C-SPAN Washington Journal, the New York Times, New Jersey Monthly, Time Magazine, and dozens of radio outlets. His commentaries have been published in the New York Post, on Fox News, and in regional media around the nation.

He spent some time with the Appriss Insights Blog to talk about his own experience in prison, his path toward advocating professionally for second chance hiring, and his perspective on how background screening organizations can help facilitate employment for the formerly incarcerated.

How did you become an advocate for fair chance hiring?

I began my career as a criminal defense lawyer and civil rights lawyer. In that capacity, I represented individuals, corporations, and corporate heads involved in different legal situations, and I did that work for a decade. I was very successful but lurking behind that public image was a completely functional alcoholic. I had been drinking since I was 15 years old, and I was hitting my 20th year of functional alcoholism. I use the word “functional alcoholism” because I had the trappings of success: advanced degrees, a very good law school education, and a highly successful business career on its face. More than ten years ago, during the summer of 2011, I was driving drunk as — unfortunately, as an alcoholic — I did all the time. Only this time, I hit somebody and afterward tried to lie my way out of it. A few days later, cleared up off the bender, I turned myself in. Thank the good Lord, that person lived. That person recovered, they're not in a wheelchair, and I don't know how that happened. That would begin my process into the state prison system. I was sentenced to six years in the New Jersey Department of Corrections.

It was an odd situation. Many of the lawyers that you see in jail are in for lawyer offenses — they took bribes, they stole money, they cheated clients, and they ended up in a federal penitentiary. I went to a state facility, instead, and one of the things that my situation shows is the breadth of addiction. There are human beings from all stripes of life who suffer from that disease and I was one. And sadly, someone nearly paid with their life for it. I went to prison, a place called Bayside State Prison, which was actually the prison my clients were afraid to go to. One of the things that stuck with me is that when I was locked up, nobody asked me for money, but nearly everybody asked me for a job. When you’re locked up with a person, you learn a lot about them. The overwhelming majority of people just want to get a job, pay their child support, support their families, pay their fines, and reunite with their families — but they don't believe that opportunity is within reach.

I was released from prison on parole, but then I had nowhere to go. My home was foreclosed, so I moved with my law school roommate. That was a transformative experience. I moved to Hoboken, New Jersey — a town that people with alcohol problems don't go to get sober. It's a party town, but where there are a lot of alcohol issues, there's also a lot of good recovery. Living in Hoboken led to a chance meeting with former New Jersey Governor Jim McGreevey, who was doing great work in the Hudson County Jail and had a vision for re-entry across New Jersey. I told Jim my story, what I saw in prison, and how I wanted to help people get jobs. Long story short, we talked about what that vision could look like, and I helped Jim execute his vision to build the New Jersey Reentry Corporation. That’s how I got my start in second chance hiring.

What can businesses do to better implement more opportunities for people who are re-entering?

Second chance doesn't mean second rate. I speak to large Fortune 100 companies as well as small and medium businesses, and that understanding needs to be the starting point for all these hiring efforts. There is a tremendous amount of qualified, exemplary talent out there that just happens to have a criminal record. Sometimes a business could think that this is a charity — that they are just going to hire these people for the sake of hiring them or to help people out. But that's an effect of what companies should be doing, not the primary goal. Business owners also have an obligation to run a profitable business and nothing should change that vision. The hard part, of course, is how do you source this talent?

Once we accept the fact that we can find the best applicants, then you actually find that there are certain things that will make people better applicants. Studies have shown that folks with a criminal record are often a business’s most loyal employees, which shouldn’t be surprising. There are a number of things businesses need to think about to do it right. For example, when a prison releases someone with a slew of municipal court dates relating to fines and fees, their employability is hindered. The person may not have a driver’s license to meet these court dates, and that’s not the business’s fault but it often creates obstacles to hiring people with a criminal record. The person also needs to go to court maybe ten times, and how often can they show up if they are trying to hold down a job? Businesses should partner with supervising agencies, and I encourage business leaders to have conversations with parole and probation officers. I often have those conversation on behalf of businesses, and you find that the overwhelming majority of supervisory agencies want people to be employed, so they will make accommodations for the right candidates.

What makes companies successful in trying to do fair chance hiring? 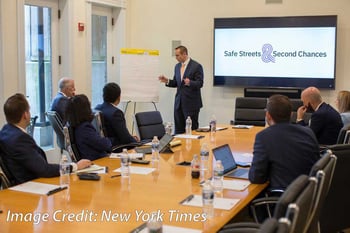 One of the key things that businesses can do is to think about the specific skills and the trainable skills. A lot of times you'll have someone who comes in with a gleaming resume, perfect references, and they just don't take to the role, and if that happens, enough times you start to realize that you can probably train for this role on the job, so we need a different kind of applicant. We need an applicant who shows an aptitude, interest, and a desire to learn. There is also a line between understanding that there are unique challenges for a person coming out of incarceration while still being fully compliant with relevant employment laws so you're not outing this person in front of all of their co-workers in a way that may be detrimental to corporate fit or company fit.

Do you think continuous monitoring could be an effective tool for risk mitigation for organizations that are trying to do fair chance hiring?

Yes. I say this from my days as a former litigator and from my days getting people jobs with second chance hiring all over this country — I think the answer is yes. I think that the hard part, and I don't think it's lost on any of us who do this work, is that the idea of continuous employee monitoring is off-putting to some. But to the business community, I think it makes a lot of sense. If I were still doing direct services, helping people get employed, I would encourage businesses to do it. If that's what gives you the comfort, go ahead and do it. If we're doing our job in the re-entry business by providing you the best candidate, then continuous monitoring isn’t going to affect them because there’s not going to be anything to monitor. I think it's a great product, but I think that there are messaging obstacles that would have to be negotiated.

How can the background screening industry support employers as they're trying to implement some of these second chance opportunities?

First of all, I want to start by thanking you guys for even caring. Traditionally, the background industry and credit reporting agencies have just reported barriers, which is their job. The trial lawyer in me understands that fully — all you do is provide the information, and what is done with that information is really the key. The fact that you're even in this conversation is particularly inspiring to me. I think that adding context where possible, appropriate, and in line with your core business function is a great way to support these efforts. For example, some background check companies have flagging systems for marijuana convictions or convictions more than 15 years old. In New Jersey, you can have something on your record called “terroristic threats,” and if someone knows nothing about the criminal justice system, they’re going to think that is extremely serious. It turns out that terroristic threats is just a very common charge in New Jersey — if you were in an argument with someone in a bar and you said, “I'm gonna kill you” or something, you've now made a terroristic threat. You're not going to prison for it, you're getting probation or it might just get thrown out, but on your record, that looks horrible. I think that background companies are in a unique position, where possible and appropriate, to add context.

Thanks to John for telling his story and drawing from his expertise to provide more opportunities for the formerly incarcerated. You can read more about his perspective on fair chance hiring in this recent op-ed, and connect with him on LinkedIn. To read more about John, read this 2019 article in the New York Times or this op-ed on Fox News.

John Koufos helps companies optimize second-chance hiring and mitigate risk. His work has helped thousands of people with criminal records secure jobs. John is a nationally recognized criminal justice advocate with deep experience building and leading criminal justice organizations and campaigns. John has been interviewed by a wide array of outlets including C-SPAN, the New York Times, New Jersey Monthly, Time Magazine, and dozens of radio outlets. His commentaries have been published in the New York Post, on Fox News, and in regional media around the nation.