The criminal justice system faces a unique challenge to contain the spread of COVID-19 as the virus continues to spread throughout the United States. Jails in particular are at a higher risk for spreading COVID-19.

As COVID-19 inevitably spreads to jails, it will create strain on both the staff and medical resources, further endangering employees and inmates.

In response, many states have already released thousands of inmates—often those convicted of low-level offenses, older inmates, or inmates with serious medical conditions—in an effort to reduce overcrowding and protect incarcerated people at a higher risk of severe infection or fatality.

These statistics, compiled from analyzing the real-time incarceration populations of more than 2,900 facilities nationwide, provide compelling new insights into the how COVID-19 could impact the U.S. jail population and the steps local governments are taking to mitigate potential outbreaks.

Which states have the highest at-risk jail population?

One simple way to determine jails with the highest at-risk population is to look at the ages of incarcerated populations. According to the CDC’s research on COVID-19 death rates by age, fatality rates increase sharply after 55.  The age distribution of states’ incarcerated populations varies significantly. There are a number of reasons for this, including sentencing strategies, differing drug laws, and overall state demographics. Our analysis showed the percentage of jail inmates over 55 can range from less than 6% to over 10%.  Delaware and Florida and California have the highest concentration of jail inmates older than 55.

The heat map below compares the percent of inmates older than 55 together with COVID-19 cases by state. 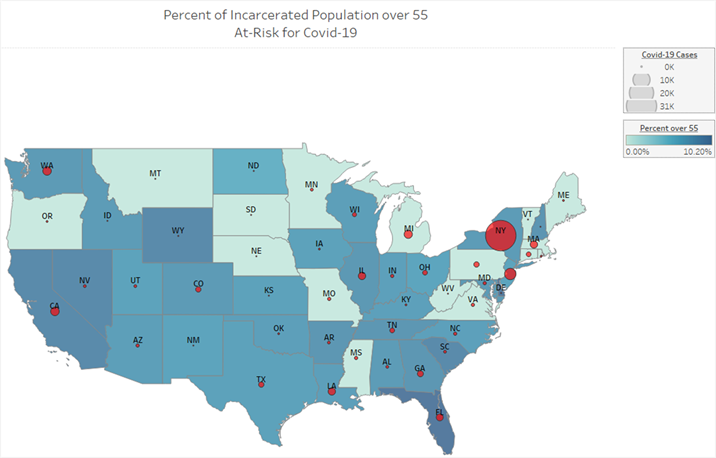 Some individual jails face an even higher risk.

The same factors that contribute to the age differences among states’ incarcerated population apply at the county level, too. In fact, demographic differences between urban counties and rural counties appear to contribute to which county jails have a larger percentage of their incarcerated population at risk. Rural counties are older than urban counties, a disparity that continues to grow.

Our analysis of COVID-19 at-risk populations across county jails nationwide supports these trends. Of the 15 county jails with the highest percentage of inmates over 55, none include large metropolitan areas.

In our dataset, we identified 142 jails with more than 10% of their jail population over 55.

As COVID-19 spreads, fewer people are being booked into jail.

The criminal justice system has already adapted in the face of the coronavirus pandemic. Many jails have released large numbers of inmates to reduce density at incarceration facilities:

But the criminal justice system is not only releasing inmates from incarceration—it is also booking significantly fewer people into jail. As more and more deputies are being directed to issue “appear in court” notices instead of arresting individuals for low-level offenses (and, perhaps, as more people stay at home), new jail bookings are declining at astounding speed.

Analysis of our data revealed that on March 13, bookings were down 5% over the previous year. By March 20, nationwide jail bookings had decreased 40% compared to 2019.

Pandemics affect our most fundamental institutions.

As Americans cope with the upheaval to work and life created by COVID-19, the justice system faces equally challenging decisions. While these data points show the impact the coronavirus pandemic is already having on the American justice system, they also reveal the infection threat faced by the tens of thousands of inmates at a higher risk of exposure and severe infection due to COVID-19.

As local and state officials work around the clock to reduce the spread of COVID-19, balancing inmate safety with broader public safety presents a unique and complex challenge. Our hope is that access to timely, important data such as this will help in critical decision making that keep our inmates and public safe.

Appriss is a data analytics company focused on saving lives, mitigating fraud, and reducing risk. Through our nationwide victim notification platform, VINE, Appriss collects real-time incarceration information from over 2,900 jails and Departments of Corrections. The data collected in this process helps keep survivors of crime safe, and it can also play an important role in identifying jails with at-risk populations.

To assess states and jails with higher concentrations of at-risk jail inmates, we looked to the CDC’s research on COVID-19 death rates by age. Specifically, we determined at-risk individuals to be 55 years or older. The fatality rate for these age brackets range from 1.4% to 10.4%. For individuals younger than 55, fatality rates are less than 1%.

Our research excluded all state DOC facilities and any jail facilities with an inmate population of less than 50.

Dr. Daniel Downs is the Lead Data Scientist for Appriss Insights, with more than 10 years of experience in modeling and developing analytical solutions. Daniel is responsible for crime analytics, R&D, and applying advanced statistical techniques. Daniel holds a Ph.D. in Criminology and Law from the University of Illinois and is co-author of the how-to handbook for analytics in retail loss prevention, “Essentials of Modeling and Analytics: Retail Risk Management and Asset Protection.”