Addressing the Scourge of Sexual Assault: How EVAWI Fights for Survivors

Sexual violence continues to be a problem in the United States. According to the National Institute of Justice and Centers for Disease Control and Prevention, one out of every six American women has been the victim of at least attempted rape in her lifetime, and an American is sexually assaulted every 73 seconds. End Violence Against Women International, or EVAWI, was founded in 2003 to address the scourge of sexual assault head on, focusing primarily on criminal justice responses and especially law enforcement investigations.

EVAWI works with professionals both inside and outside the criminal justice system to improve outcomes for survivors and hold their assailants accountable and combat gender-based violence. Supporting this mission is Dr. Kim Lonsway, Director of Research for EVAWI and one of its founding board members. She recently spoke with Appriss about Domestic Violence Awareness Month, partnering with Appriss, and the keys to combating sexual assault on a national scale. This conversation has been edited for length and clarity.

What is the mission of EVAWI?

At EVAWI, we envision a world in which gender-based violence is unacceptable on every level and where victims receive the compassion, support, and justice they deserve. We are a professional training organization that seeks to be multi-disciplinary in everything that we do, and our goal is to improve criminal justice responses for gender-based violence, with a particular focus on sexual assault.

What are the primary ways that EVAWI is helping victims? 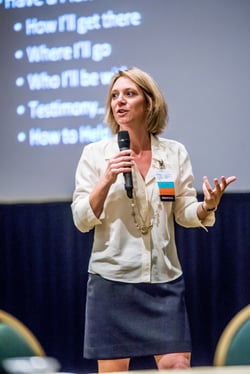 Everything we do is designed ultimately to help survivors. As a professional training organization, our focus is making sure that professionals are prepared to serve survivors well, giving them high quality services, and compassionately helping them to understand the effects of their victimization. Our focus is not on direct services for survivors, but we try to prepare an army that does provide direct services. We hear from professionals all the time about how something they learned from us helps them do their job better.

The other area we focus on is our Start By Believing campaign, which aims to transform the way we respond as a society to sexual assault. In the crime victim field, the true first responders are actually friends and family members of survivors. When a survivor tells someone they love that they were sexually assaulted, that initial moment of response is critical. If that person responds well, that has a documented positive effect on a survivor’s healing. It also means a survivor is more likely to reach out for other kinds of help. If that first interaction goes poorly, on the other hand, and the first responder reacts with disbelief, it causes specific harms, and the survivor will be less likely to reach out in the future. At EVAWI, we want to make sure that professionals are prepared to respond well and that loved ones respond well so that survivors will knock on the doors of the victim service professionals.

What stands out to you about the relationship between Appriss and EVAWI?

Appriss and EVAWI share quite a bit of mission overlap. There is a long history of partnership between our two organizations, from conference sponsorships and participation, to promotional materials, to webinars providing information about VINE and EVAWI resources. In the last couple of years, we've made a concerted effort to make sure our training materials reflect VINE where it makes sense. The impact of VINE has been historic, and it's hard to imagine a world without it. The research suggests that a key complaint of sexual assault victims who participate in the criminal justice system is a lack of information. They don't know what's happening during the criminal justice process or why it's happening. They can easily fall through the cracks in so many ways. VINE plays a critical role in addressing this need and gives advocates a tool they need to make sure victims are informed and empowered.

How does EVAWI work to counter sexual assault?

There is a lot of great work being done in the areas of child abuse, domestic violence, and related fields, but sexual assault has lagged behind historically. Part of the reason for that is that sexual assault has a strong taboo component, meaning that our progress as a society has been slower in the field of sexual assault. So, Sergeant Joanne Archambault, who served in law enforcement for 23 years, founded EVAWI specifically to address that need and improve criminal justice responses. Our DNA as an organization goes back to that mission – improving law enforcement responses to sexual assault and sexual assault investigations, and we have made good progress in that area. We can now see the impact this organization has had in the field.

How can we effect change in the area of sexual assault?

Another way sexual assault can be a taboo topic is because we do not want to believe how often it happens. We don't want to see it and we don't want to talk about it. So, if we can deny it or blame the victims for it, then we don't have to challenge the way we intuitively think about it. That’s what makes this field so hard, but it is also sometimes what can make it so fulfilling. Making a difference on behalf of survivors to change perceptions and assumptions around sexual assault is profoundly satisfying.

What does it look like for us as a society to begin believing victims?

A colleague in our field once said something that has always stayed with me. He noted that “people often use the phrase: 'You have to see it to believe it.' But with sexual assault, you have to believe it to see it.” I have always found that profound. Once you open your mind and heart to the reality of sexual assault in our society, you will start to see it for the problem that it is.

One of the biggest challenges in responding to sexual assault is how we think about both the denial of it and the justification for it. Some people will say, “Well, it didn't happen, but if it did, it was obviously something that person brought on themselves.” In other words, we don't have to deal with sexual assault because it either didn't happen, or if it did happen, it was obviously the victim’s fault because they did X, Y, or Z.

Those ingrained beliefs are the biggest challenge in dealing with sexual assault, and that’s true both on the professional side and the personal side. We are a professional training organization, and I think we do a great job at helping professionals build their skills, but if they simply don't believe victims, all that training isn't going to do any good. And on the personal side, again, the true first responders are friends and family members. If your loved ones don't believe you when you say you were sexually assaulted, how likely is it that a police officer will? Or a nurse? Or even an advocate? Not believing survivors is the core philosophical challenge we have to get past in order to effect meaningful change. If we could get past that one, I think all the other challenges become more manageable.

Thanks to Kim for an informative and educational conversation! You can more about EVAWI and its mission on their website. Since the ongoing problem of domestic violence is on the forefront of many minds during the month of October, consider registering for the upcoming virtual panel discussion, titled “Stalking in the Digital Age: Responding to Victimization,” October 29 from 3:00 to 4:30 p.m., Eastern Daylight Time. During the panel, you will learn how digital technology can be misused and hear from industry leaders in victim services and law enforcement on best practices for responding to digital stalking.