How VINE helped a survivor find peace of mind

In 2011, Anna Nasset was living what she calls her “best life.” After purchasing an art gallery in Washington State four years earlier with just $200 in her bank account, Anna put her business plan to work. Before long, she was at the forefront of promoting arts in the region, and her gallery was growing. She was achieving her dream.

One November evening, that all changed. Anna was working on a design in her gallery when she heard a knock at her gallery front door. She had a brief conversation with the man at the door, who left her a small painting as a gift before leaving. It seemed to her like a harmless conversation, but it was the first domino in a chain of events that would dramatically alter her life. 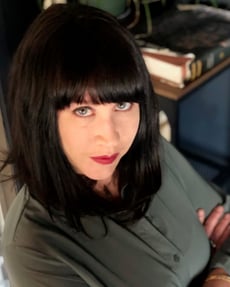 As innocent as he seemed initially, that man soon began harassing Anna with letters, phone calls, and messages. At first, he hoped to submit a piece of artwork to Anna’s gallery, but when she denied the submission, his correspondence became more aggressive and sinister. The messages grew personal, and before long Anna was forced to contact local law enforcement out of concern for her own safety. The authorities told her the man was a well-known stalker in the area who had clearly identified Anna as his first victim. He also was a diagnosed schizophrenic who also had a rare mental health issue known as erotomania — a psychiatric delusion in which a person erroneously believes that another person is in love with them. When that “love” is not reflected by reality, As Anna has put it, "he thinks we are married and yet he also wants to harm me.”

After Anna reported her stalker, his behavior worsened. Despite a warning Anna wrote under the guidance of law enforcement, telling the man to stay away from her completely, his stalking persisted. He wrote to her, followed her, called her, and waited for her outside her gallery.

In 2012, her stalker was arrested and sentenced to 364 days in jail, giving Anna momentary relief from his dangerous behavior. At the same time, Anna first signed up for VINE, the nation's largest victim notification platform. This includes when an offender is released from prison or transferred to another facility. VINE provides women like Anna the peace of mind that comes with staying informed and up-to-date about their offender’s incarceration status.

After her offender was released in 2013, he continued to find new ways to stalk Anna, despite staying away from her physically. No longer capable of continuing her life as normal in Washington, Anna moved to Vermont, hoping a quiet new life would let her leave his presence behind. But soon, he was back on her trail, with renewed threats and proclamations of love. He was arrested a second time and incarcerated on two felony counts of stalking. VINE once again was a central part of Anna’s life, informing her immediately any time he made bail or was transferred. Every alert from VINE gave Anna the freedom to change her routine and make decisions based on as much information as she could have.

Anna’s offender has been convicted of the two felony charges of stalking and cyber stalking. In September 2019, Anna’s offender was given the maximum sentence of ten years in prison for his crimes.

Empowering other victims with her story

Sadly, Anna’s story is not uncommon. 7.5 million people are stalked every year, and in 10% of cases, they are stalked by a person they don’t know. In the other cases, the stalker had some sort of previous intimate relationship with the victim. Millions of people every year—mostly women—are stalked by former partners, forcing them to make major sacrifices and disruptive life changes just to re-discover a sense of normalcy. Even when their stalker is apprehended and brought to justice, like Anna’s was, survivors face anxiety, depression, and PTSD.

“There is no conclusion or happy ending to my story,” Anna said last summer. “I see a therapist regularly to navigate life as an ongoing victim. It’s not easy. But I find being able to speak and share my story — hoping that just one person walks away with a new tool or a deeper understanding of stalking — well, that makes it all worth it. And as I’ve started to speak publicly, I have seen myself come back. I’m not the same woman I was eight years ago, but I am strong and getting stronger.”

For the last two years, Anna has spoken powerfully about her story, knowing there are millions of women who have had the same experience and can find peace and purpose in Anna’s courage. She has spoken all over the country, including as a featured speaker at the annual conference of the National Organization for Victim Assistance (NOVA) for the last two years, and recently started a podcast focused on victim services. She still lives in Vermont, where she runs her business, Stand Up Resources.

Anna has spoken widely about how VINE gave her peace of mind about her stalker by providing a constant flow of information about her offender’s booking status. Next week, she and Jamie Weimer, the Washington VINE Program Manager, will talk about Anna’s story and the Washington VINE service during a webinar titled, “In Her Own Words: A Survivor of Stalking Shares Her Story.”

The webinar will take place on Thursday, April 16 from 3:30 to 4:30 p.m. The webinar will also include important information about and a demonstration of VINE. We encourage you to share the registration details within your agency and community.