More than 1 in 6 women and 1 in 17 men will be stalked in their lifetimes. This frightening reality is the impetus for the creation of SPARC, the Stalking Prevention, Awareness, & Resource Center. SPARC aims to enhance the response to stalking by educating the professionals tasked with keeping stalking victims safe and holding offenders accountable. 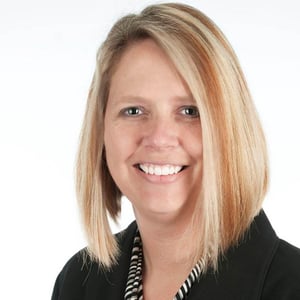 We talked to Landhuis about SPARC and its work leading outreach efforts for National Stalking Awareness Month, commemorated each January.

What drew you to this work?

I’ve been an advocate on the issues of domestic and sexual violence as well as stalking for over two decades. I started first as an advocate for a decade in a local domestic violence/sexual assault program providing direct services. Then I was at a state coalition for about a decade where I provided trainings to organizations working to enhance the safety of victims as well as trainings with the criminal justice system. And then the opportunity to start SPARC came along and I was excited to work on the national level to enhance the recognition and response to stalking.

How did SPARC come into existence? Have you been involved since its launch?

Aequitas, a nonprofit focused no developing, evaluating, and refining prosecution practices related to gender-based violence and human trafficking, applied for a comprehensive Department of Justice, Office on Violence Against Women grant in 2018. We received that grant and formed the SPARC project in the fall of 2018. I was part of the team that wrote the grant and I have been the director since the beginning of the project.

What are some common misconceptions about stalking victimization?

Many people believe stalking only happens within the context of domestic violence. And while approximately 60% of female victims and 40% of male victims are stalked by a current or former intimate partner, not every stalking case is a domestic violence case. While it is true that a majority of stalking victims do know their stalker, it’s important to realize that victims are targeted by acquaintances, family members, and even strangers. We must continue to recognize that stalking is a separate and distinct crime from domestic violence and that calls for specific safety planning for individuals who are impacted by stalking as well as accountability for stalkers.

Stalking has gone from relatively low-tech to incredibly high-tech. Has that made it more challenging to address as an advocate and service provider?

The use of technology to stalk has certainly made thing more challenging for victims, who often feel like there is no safety. They feel like using phones, accessing the internet, or using other technology is unsafe and that’s a scary and overwhelming feeling. It also can pose challenges to law enforcement and others who are working to investigate these crimes as it can be a barrier to investigation. On a positive note, it can give us evidence where evidence didn’t exist before. Now that we have cell phones for videos and pictures or the ability to take screenshots or record calls, it can enhance the ability of victims to be able to document their victimization.

Can you talk about the impact of COVID-19 on stalking? Has the rate of victimization increased? What impact has social distancing and isolation had on victims and the ability of advocates and providers to serve them?

We don’t have any hard data on this issue. What we know anecdotally is that domestic violence hotlines are seeing an increase in calls so we can assume that stalking victimization is also increasing. We also hear from our tech partners that there has been an increase in the number of spyware downloads and other means for tracking individuals so that poses a concern.

SPARC has a number of resources and trainings available on demand, and webinars and other activities planned for National Stalking Awareness Month. What are you hoping to accomplish during this year’s convening?

January is always a time for us to highlight the impact stalking has on the individuals who experience this issue. It’s important for us to highlight how prevalent stalking is, who is impacted by these behaviors and where victims can turn to for assistance. We design social media posts, encourage communities to host awareness efforts, as well as highlight the issue for the media and others in hopes that we can increase awareness of the issue and connect victims to resources. 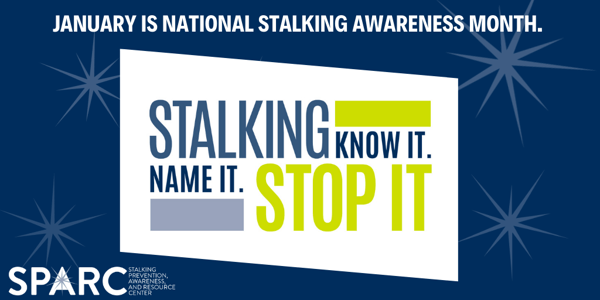 How challenging is it to arrest and prosecute a stalking offender? For victims whose offenders are in the criminal justice system, can you talk about getting them connected to resources like VINE to track their offenders’ status?

Investigating and prosecuting stalking crimes can be challenging due to the contextual nature of the crime. We don’t have current data on the rates of arrest and prosecution. Historical studies estimate that of those that are arrested for misdemeanor stalking, approximately 24% were convicted of stalking specifically (Jordan, 1999). If stalking offenders are arrested, victims can utilize platforms such as VINE, where available, to track the status of the offender. Victims can also use VINE to connect with local service providers who can assist victims of stalking with safety planning and additional support and resources. (Note: The Service Provider Directory is available in states on the new VINE platform.)